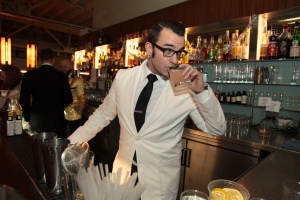 Sean Kenyon at the bar

Here are some cocktails and cheese pairings from Lisa Futterman of Pastoral Artisan Cheese, Bread & Wine in Chicago.

Bourbon Old Fashioned – The nutty and sweet flavors of Alpine-styled cheese like Comte play well with the vanilla, orange and caramel notes of the bourbon with the spiciness of the bitters tying everything together.

Peruvian Pisco Sour – We decided to pair dry on dry for this one, Capriole’s Sofia is a tangy ash ripened goat’s cheese with a velvety texture and earthy notes. It melts seamlessly into the richness of the egg white and the acidity of the cocktail works well to refresh the palate.

Sazerac – An herbal, earthy, funky cheese like Morbier softens the blow of the high booze content in the Sazerac while the cheese’s funky mushroom flavors and grassy tones fit right in with the absinthe wash.

Bloody Mary – To play off this American classic we chose the Mareike Smoked Cumin Gouda. The smokiness of the cheese goes well with the tomato component as well as the spice.

Manhattan – The elegance of Ossau Iraty, a sheep’s milk cheese that is the definition of balance which compliments the finesse and richness of the classic Manhattan.